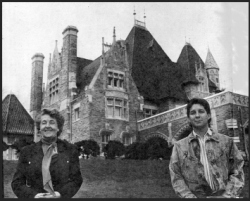 In 2008, Tommy was contacted by E. Black, an independent researcher.
Her work is published on http://jonestown.sdsu.edu/
This website is sponsored by the Department of Religious Studies at San Diego State University.
She has made several connections which serve to provide plausible answers & explanations to many questions,
including Why was Tommy brought to Father Divine?
She provides in-depth investigation, and fascinating connections of Jim Jones obsession with Father Divine.
Tommy’s presence likely saved many lives.
Search the site for Father Divine and you will find dozens of investigative stories connecting Divine and Jones.

Mention the name of Father Divine to most people nowadays and at best you’ll get a blank stare, followed by Who? Or they may evoke Rev. Ike or some other televangelist preacher with the sole purpose of securing a few dollars from your wallet.

A more informed response will come from those who know something about African American history, and particularly the 1930’s when Father Divines Peace Mission Movement provided food and succor to millions of starving, homeless people. Leaf through any compendium of black history and invariably you’ll find a chapter, a photo, a personal reflection on Father Divine and how his ministry of social criticism, anti-racism, and the general welfare of the community was indispensable during the Great Depression.

While a thoroughgoing discussion of Divines mission can provide crucial insight, that is not Tommy Garcia’s main objective, nor is such an undertaking possible given Divines edict that his biography was beyond apprehension. What Tommy so grippingly relates, however, is almost as fantastic as some of the astonishing events of Divines life, and to some extent it is consistent with his often strange and unorthodox way of dealing with American reality.

By the early 1960’s, Divine, whose followers believed him to be God incarnate was in the twilight of his years. Born George Baker, Jr. in 1879 or 1877, depending on the source, Divine was in his early eighties and perhaps worried about his mortality despite the god-like, self-proclaimed divinity of his being and a belief in eternity.

Father Divine forbade sexual intercourse, thus there was no possibility of his producing an heir with his second wife, Mother Divine, leaving no alternative but adoption. Who among hundreds of choices would be the lucky one What youngster would be chosen to live in the lap of luxury and comfort, and maybe one day inherit Father Divines extravagant empire He chose the boy who did not have his eye on those prizes or the throne.

In 1962, like Moses out of the bulrushes, Tommy Garcia was delivered to Father Divines luxurious doorstep in Gladwyne, an affluent suburb of Philadelphia. Garcia, 8 years of age, along with his 3-year-old sister, Susan were abandoned by their mother at The Divine Lorraine hotel in Philadelphia where they spent the night, unaware of each others whereabouts. The next morning, the two youngsters of Greek and Mexican ancestry, were delivered unto the Father, at Divines 72-acre estate, Woodmont. The Mount of the House of the Lord, was a 32-room French Gothic mansion, chateau surrounded by manicured acres of lawn, formal and terraced gardens, ponds and streams. Susan was immediately taken away and raised at another Divine property, and Woodmont became home for Tommy.

Though it was a relative haven’t Tommy, who may have been chosen as part of Father Divines mission of an integrated society, it was still disconcerting, almost alarming without the comfort and love of their natural mother and father.

But let me stop because this is Tommy’s story. A compelling saga of how he endured years of living at Woodmont, his relationship with his new ?parents, his sisters ordeal and eventual tragedy, and his subsequent return to Woodmont in an attempt to piece together those eventful days of his youth. What possessed his mother to deliver her children to Father and Mother Divine When did he realize he could no longer maintain his sanity at Woodmont? How did his sister’s death impact his life How did he stabilize his life after the tumultuous years with the Divines These are a few questions that Tommy answers as he unfolds the narrative of his life. His is a unique American story  sui generis. While Tommy is at the center of this story, I believe it also provides an aperture into one of the country’s most fascinating human rights leaders, Father Divine.

Herb Boyd is an awarding winning author, journalist, TV host and professor. He has published more than 22 books and countless articles for national magazines and newspapers.

Theme by Anders Noren — Up ↑